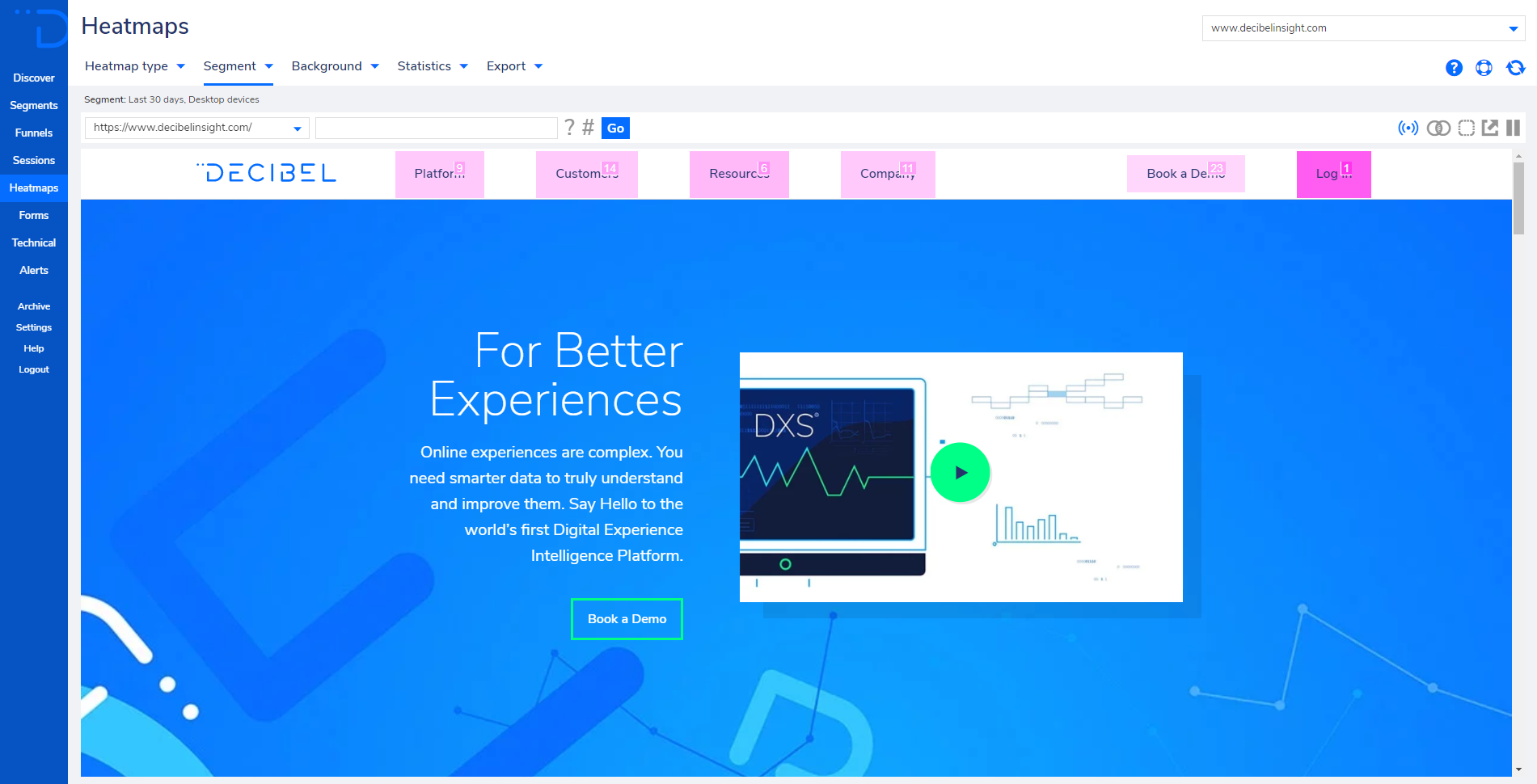 You can also select to ignore these clicks using the respective Ignore button which will re-draw the Heatmap excluding these clicks.

Attribution Heatmaps are available for clicks, touches on touch-enabled devices, hover, goals achieved per piece of content and the value of each piece of content if this has been configured in goals.

Clicking Heatmap Type from the top menu allows you to change the type of Heatmap that you are viewing, along with providing a number of options.

Data allows you to choose the type of your selected Heatmap. For Attribution Heatmaps, you can choose Click, Touch, Hover, Goal and Value as mentioned above.

The option below Key allows you to select whether you wish to show/hide the Attribution table at the bottom of the Heatmap.

Scrolling to the bottom of the Heatmap will also display a table showing the total number of clicks per element, ordered by the most popular. The element names are taken from the ID of the link, or from a parent ID. If no ID is present, then the Decibel Insight script will generate a random ID for the link, which it will also display in the table. If two elements are showing the same ranking and the same number of clicks, this is usually due to the fact that they are both directed to the same link, have no ID present, and are in the same structure, often found quite close together, which results in the Decibel Insight script generating the same ID for these elements. This can easily be avoided by simply adding an ID to the elements. If you see that an element in the Heatmap table is greyed out, this is because the element in question is no longer present on the page.

Out of the box, the Attribution Heatmaps will display clicks for anchor links, and input types of submit and button, along with buttons that contain HTML IDs. You can configure the Attribution Heatmap Selector to track clicks on other items using a selector, however, the items in the specified selector must either be an anchor link, input type of submit or button or match the added selector such as button and have an ID. If the element doesn't have at least one of these criteria, it will not be collected and adding a selector to the Attribution Heatmap Selector will not result in Decibel Insight collecting clicks for this element.

You can see all of the Session Replays of users who click on a particular element of the page by hovering over the number by the element that you are interested in and clicking the Show Visitors button.

This will show you a list of all of the Sessions that clicked on the relevant piece of content, and you can click the Play button next to a relevant session to see the Session Replay for that visitor.

Attribution Heatmaps can be exported as PNG, CSV or JSON files using the Export feature, while you can also export sessions data when using Boundary Mode.

The 'Show attribution table' option allows you to see all the elements within the page with their assigned di-id's. The table is ranked by default according to the number of click data for the given date range with the numbers representing the order in rank itself. 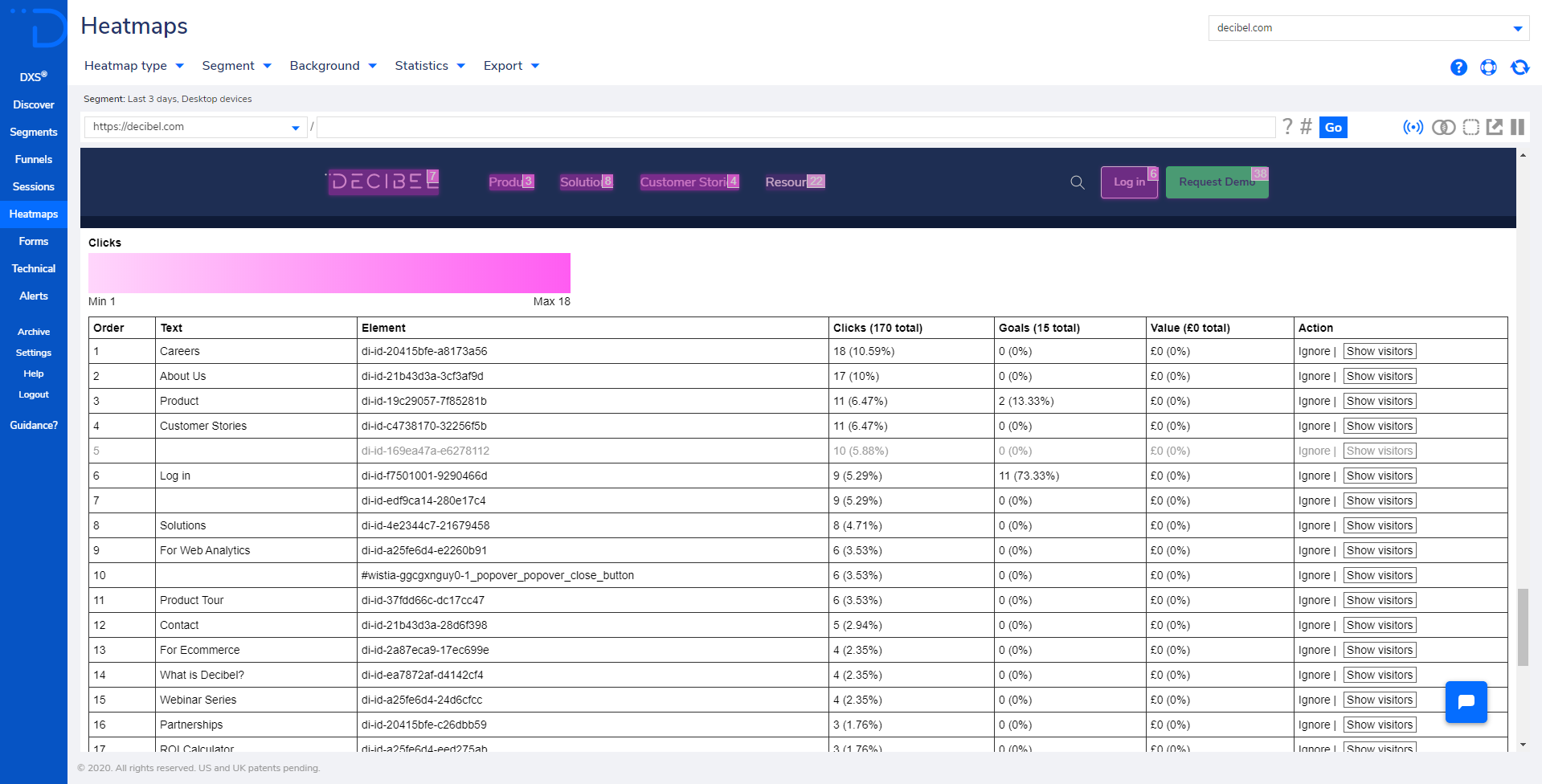 Decibel has two criteria's when it comes to what we show in the ranking list;

- the percentage of clicks that the elements represent are within the 90% percentile which we then show regardless if the element is present or not.

The numbers of clicks that an element should have in order to be shown in the table, is shown at the bottom of the ranking table